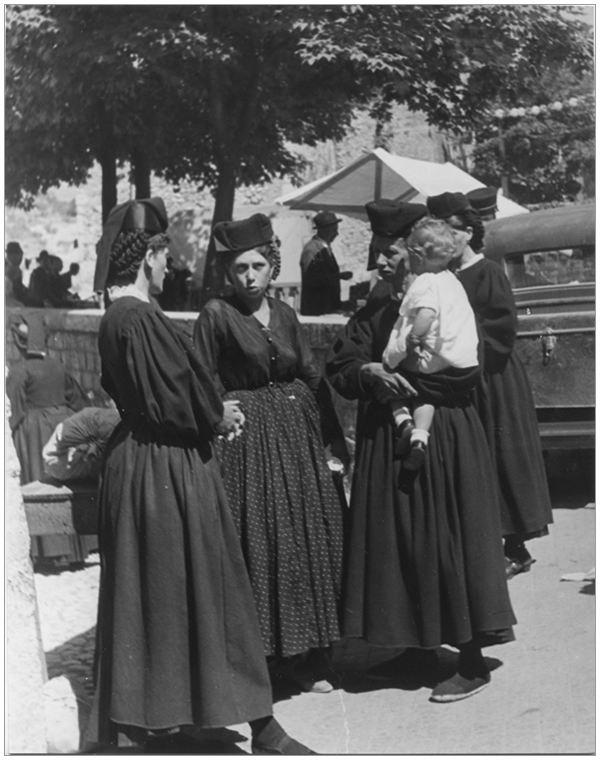 Corinna's speech at the opening of the second show

A big thank you to mayor Pietro Spacone for inviting us and to Comune di Scanno for staging this second show of my mother’s work. It’s great to be back again after eight years.

It is wonderful to see a community and its comune treasuring and promoting its cultural heritage – especially at a time when austerity has hit local councils hard. In Britain, councils are closing down – or “cutting free” – theatres, museums and cultural activities especially outside the big centres like London.

This exhibition materialised thanks to an art historian, Tamara Hufschmidt, who worked at the German Art Historical Institute in Florence. In 2004, she had just completed the digital archiving of the archive which my mother bequeathed them. Tamara proposed that an exhibition should be organised in 2007 to celebrate the centenary of Hilde’s birth. She then got in touch with Angelo Cetrone, then the mayor of Scanno, who was inspired to support her idea.

My partner Robbie Griffiths and I scanned the original prints which my mother had left me. The scans were then transmitted from London to Aquila, where Francesca Pompa, Duilio Chilante and OneGroup made them into this exhibition which first took place in April 2008. Some favourable reviews of the show soon appeared in the Italian press, including ones by Italo Zannier and Antonio Bini.

Shortly after the show was staged, we were pleased to discover that Matteo d’Angelo, a student at Milan University, included a chapter about Hilde and Scanno in his dissertation Henri Cartier Bresson in Italy, completed in 2010.

My mother, who was born in Munich, Bavaria, trained first as an art historian and then as a professional photographer.  Growing up in the Weimar Republic, she saw the Nazis seize power in the “capital of the movement”. After gaining her qualifications, she travelled in Italy in the early 1930s, working as a freelance photographer, employed by art and architectural historians.

She first arrived in Scanno around 1935, with a fellow Munich photographer, Helga Franke. Eight of their images were published in a German photo-magazine, “In Italian mountain nests”. Capturing daily life there became Hilde’s own, personal project – a chance to portray living, breathing women – as contemporary classics. She portrayed women at work in simple clothes, or on festive days, wearing their handmade, traditional clothing. Her approach was intimate. She showed life in Scanno as a living culture. The women of Scanno are true individuals, not ethnographic subjects. She combined photoreportage with an acutely aesthetic awareness, from close-up portraiture to sculptural and frieze-like processions.

As Tamara Hufschmidt has written, “Hilde’s lens is that of a social critic and an art historian. She knew how to present the women of Scanno as living classical sculptures who retain their individuality, but at the same time become icons.”

Scanno was probably Hilde’s most pioneering creative project but not her most ambitious. Her archive in Florence consists of 714 photographs. They are a unique and poignant record of the city’s sculpture, squares, palaces, courtyards, and streets, completed just before much of the town’s medieval centre and its beautiful bridges were devastated by Nazi bombing in August 1944.  Her images of Florence were destined to become part of a book. But it was never published – Friedrich Kriegbaum, the author, was killed by a bomb dumped by allied aircraft before he could complete it.

Hilde fell in love with Italy first and then with my father Wolfgang Lotz, who was here on an art historical scholarship. They lived in Florence, in the medieval Torre dei Ramiglianti. They had no desire to return to Nazi Germany, remaining in Florence until 1942, when my brother was born. After Wolfgang was drafted into the Wehrmacht, Hilde had to go back to the Reich so she could draw his soldier’s pay. But she returned briefly in the middle of the war to Florence in 1943 to collect her photographs. She treasured her Scanno photos, taking them when the family moved to America, then back to Rome and finally to Munich where she died in 1999. I was lucky to inherit them and have this wonderful connection with you here today.

Scanno had a profound impact on my mother. And her oeuvre in turn has influenced new generations of photographers as well as the people of Scanno. Let’s hope that we will continue in the footsteps of Hilde to enrich and renew this work for the 21st century.

I’d like to dedicate this second showing of the exhibition to Tamara, who sadly died in November 2009. On behalf of my brother and sister, who could not join us today, thanks again.