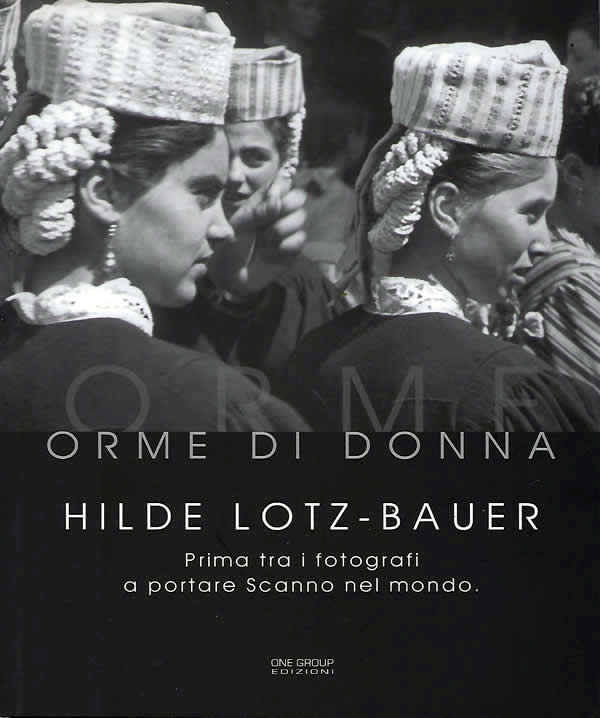 Scanno through the photographs of Hilde Lotz-Bauer (1933-38)

Hilde Lotz-Bauer (1907-1999) was an art historian as well as a talented and versatile photographer. Born in Munich, she sojourned in Italy between 1933 and 1943, portraying the Italian landscape and observing its people and their customs with her compact Leica camera. She bequeathed the photographs made in these years to the two Max Planck Institutes in Italy – the Biblioteca Hertziana in Rome and the Kunshistorisches Institut in Florence. The Florentine institute organised the first on-line exhibition to celebrate her centenary in 2007, presenting her work internationally. Thousands of her travel photographs are also preserved as negatives in the archive of photographer Franz Schlechter in Heidelberg. This Pandora’s Box remains largely unpublished. In this archive, photographs of Scanno, Frattura and Sulmona indicate that her visits to Scanno may have begun in 1938. Other evidence, including a photo-essay in a German magazine, suggests she may have been there several years earlier.

Photo-historian Italo Zannier described Lotz-Bauer, in an article in Il Sole –24 Ore (8 July 2007) as “The first woman to capture Scanno on camera”, placing her alongside outstanding colleagues like Julia Margaret Cameron, Dora Maar, Lisette Model, Tina Modotti and Wanda Wulz, who practised their métier with intelligence, sensibility and impressive energy.

The online exhibition and Zannier’s article had an astonishing resonance and aroused the interest of Scanno’s Mayor, Angelo Cetrone. He conceived In a Woman’s Footsteps precisely to value and celebrate female talent as well as the major role that women have played in looking after and developing this part of the Abruzzi. It was his initiative, which has given Hilde Lotz-Bauer’s oeuvre its historical significance for this small mountain village.

Lotz-Bauer’s 34 photographs of Scanno were made twenty years before the Neo-Realism of Cartier-Bresson and Marco Giacomelli appeared on the scene, followed by Gianni Berengo-Gardin. They are being shown publicly for the very first time, thereby revolutionising the traditional place of Scanno in the canon of 20th century photography, which has until now been linked to these better-known photographers. It is a contribution to highlighting Hilde Lotz-Bauer’s pioneering role in venturing to this small town, nestling in the mountains on the slopes of a charming heart-shaped lake, whose existence was virtually unknown. She recognised that Scanno was a place uncontaminated by “civilisation”, hardly known by anyone, whose inhabitants survived off the fruits of the earth and by tending their sheep.

The footsteps of a woman, therefore, in the photographic history of this village, are those of a traveller, who in the wake of the Grand Tour traced a new path of impressions. In her images she recorded that which others, amongst them Anne Macdonell in her Viaggio in Abruzzo (1907) and Estella Canziani, had written about. They created a legend which told of proud women with olive-coloured skin, and almond eyes, oriental lips, long skirts, pleated at the back, often weighing up to ten kilos, wearing richly coloured head ornaments, braided of coloured ribbons.  These are the “queens” portrayed by Lotz-Bauer as they go about their daily rites: carrying water and firewood, drying chickpeas on the steps of narrow lanes, working with wool, lace making, weaving and dying fabrics.

With the social-critical eye of her camera, she caught the comings and goings of peasant life, the hard toil of women who each day had to contend with the obdurate nature of the location itself, abandoned during the winter months by their husbands and sons, as they followed the migrations of their flocks to warmer climes. The choice and positioning of the subject, perspectival effects, the fall of light, framing and focus are all informed by an artistic sensibility, which draws out the special nature of each event. Hilde Lotz-Bauer has left behind a wonderful photographic record.  She captures the joyful atmosphere of festive occasions in the village, but also the serious focus of women at their work, the sceptical expression often seen in the faces of country folk.  Thanks to her particular combination of anthropological interest and scientific curiosity, Lotz-Bauer discovered and documented rituals, which already in her time belonged to the past, in which the women of Scanno were the protagonists.

Heartfelt thanks to those who have made it possible to pay tribute to Hilde Lotz-Bauer in mounting this exhibition: the Lotz family who placed at our disposal many biographical documents and the priceless inheritance of their mother’s photos; Angelo Cetrone, Mayor of Scanno, who has sought to recover a period in Scanno’s photographic history and the role of women in the local community. Thanks also to Robbie Griffiths, Dario Corrado, Antonio Bini, Regine Schallert, Martina Ingendaa, Francesca Pompa and Duilio Chilante.